The greatest footballers of all time have their names etched in the history books of Nigerian sports. One of them just might have been the best football player in the world. These men for years stood tall as patriots of the Nigerian nation and played with their hearts. As they passed and dribbled the ball, gave the fans a show and sponsors a run for their money, they put smiles on faces for life.

Football players are more than entertainers, they are heroes who carry the national flag high up in the sky. Here is a list of Nigeria’s greatest footballers of all time.

Kanu Nwankwo is a retired Nigerian footballer and one of the greatest footballers of all time. He was born August 1, 1976, in Owerri, Nigeria. Kanu’s career began at the Nigerian league club, Federation Works. Kanu Nwankwo, throughout his career, played for Iwuanyanwu Nationale, a Nigerian team, Dutch side Ajax, Inter Milan of Italy, and English clubs Arsenal, West Bromwich Albion and Portsmouth. The Nigerian legend, popularly called Papilo, has many achievements to his name.

These achievements include; a UEFA Cup medal, three FA Cup Winners, an Olympic gold medal, Premier League title, UEFA Champions League medal, Medals and two African Player of the Year awards. He is also one of the only players to hold such award combinations.

Jay Jay Okocha was born Augustine Azuka Okocha August 14, 1973, in Enugu, Enugu State, Nigeria. He is a Nigerian former professional footballer who played as an attacking midfielder. A quick and talented playmaker that is Jay Jay Okocha started playing football in the street with a makeshift ball like many other kids and football stars. He is arguably one of the best Nigerian players of his generations and greatest footballers of all time.

Known for his confidence with the ball, dribbling skills, the use of feints and technique, Jay Jay Okocha deserves some accolades.

During his career at Bolton Wanderers, he was described as being ‘so good that they named him. In his 18-year long career, he played for Enugu Rangers, Borussia Neunkirchen, Eintracht Frankfurt, Fenerbahçe, Paris Saint-Germain, Bolton Wanderers and Qatar SC respectively. He is also heavily awarded.

RashidiYekini was born October 23, 1963. He was a Nigerian footballer who played as a striker. Born in Kaduna, Nigeria to Yoruba parents, Rashidi Yekini began his football career in the Nigerian league after which, he moved to Cote D’ Ivoire to play for the Africa Sports National. With a professional career that spanned more than two decades, Rashidi Yekini gave meaning to football. His most memorable years were with Portugal and Vitória de Setúbal, eventually becoming the Primeira Liga’s top scorer in the 1993–94 season after scoring 21 goals. The star played in six other countries asides Nigeria.

Record has it that Rashidi Yekini scored 37 goals as a Nigerian international in 58 appearances, making him the national record goal scorer. He represented Nigeria in five major tournaments scoring the country’s first ever goal in the World Cup competition. He attended two of them. in 1993 he was dubbed the African Footballer of the year. After reportedly being ill for a long period of time, Rashidi Yekini died in Ibadan, Nigeria in 2012 at the age of 48.

Daniel Amokachi was born Daniel Owefin Amokach on December 30, 1972, in Kaduna, Nigeria. He is a Nigerian former professional footballer, played as a forward and the former assistant manager of the Nigeria national football team. Amokachi is one name that has graced many songs of victory including Fake Jersey by Teni released in the first quarter of 2018.

He has also been a technical director since 2006. Nicknamed ‘The Bull’, Amokachi was discovered by the Nigerian national team coach at the time, Clemens Westerhof, while playing for Ranchers Bees. It was that coach who brought the talented Daniel Amokachi to the 1990 African Nations Cup, and soon after, Amokachi moved to Belgium to play for Club Brugge. The legend has many achievements to his name. With World Cup appearances, he was third in the African Footballer of the Year award three good times.

Amokachi during his time as a professional football player was known for his speed, physical strength and technique with numerous nicknames like Black Bull and Black Train to attest to the fact. Amokachi, contributed to Nigeria’s top two tournaments including the World Cup along with his attack partner Emmanuel Amunike.

Amokachi scored the first goal of the UEFA Champions League with Club Brugge on 25 November 1992, beating CSKA Moscow 1–0. Under various clubs, he has achieved great heights and held managerial roles.

Joseph Yobo was born Joseph Phillip Yobo on September 6, 1980, in Kono Rivers State, He is, like every name on this list, a former Nigerian professional footballer. He played as a centre back. Mighty Yobo was the captain of the Nigerian national team until his retirement from international football in June 2014 and is Nigeria’s joint record appearance holder. The young star at the time left Nigeria in 1998 to join Standard Liège making his first team debut in 2000. Yobo went on to appear 46 times. In 2001, he was bought by Marseille. He has also played for Everton, Fenerbahçe and Norwich City. For the Super Eagles, Joseph Yobo has played in three FIFA World Cups and Six African Cup of Nations with one win to his name.

Stephen Keshi was born Stephen Okechukwu Keshi on January 23, 1962 in Azare, Bauchi State, Nigeria to parents of Igbo decent from Delta State. This notable legend was a Nigerian football defender and manager. During his playing career, great Keshi earned 60 caps for the Nigerian national football team. This makes him the Nigeria’s second-most capped player at the time of his retirement.

Stephen Keshi represented Nigeria at numerous major tournaments including the 1994 FIFA World Cup and the 1994 Africa Cup of Nations. He captained the Super Eagles to victory in the latter. Not just that, he also played at club football level in five countries. Most prominent of which is Belgium, where he had won the Belgian league championship with R.S.C. Anderlecht in 1991, what a super star. He was a successful player and carried that success into his managerial roles.

StephenKeshi achieved success by qualifying Togo for the only FIFA World Cup appearance in its history in 2006. Prior to the tournament, he left this position and was replaced by Otto Pfister. He went on to coach his native Nigeria, where he became one of only two people, along with Egypt’s Mahmoud El-Gohary, to have won the Africa Cup of Nations as both a player and a coach. On the 7th of June 2016, the football world was sent into mourning as the news of his death rocked the West Africa and beyond.

With his trademark hair doo (Sometimes plated green-white-green) brought so much attention to himself and to his country Nigeria.

He made name in Auxerre, Inter-Milan, then later Derby County and Plymouth… West was quite a character on and off the field… a big nemesis to many strikers in his time. He was known as a defender that played football with his own blood…

He was a member of the original Nigeria Dream team that won Gold medal at the 1996 Olympics in Atlanta USA. 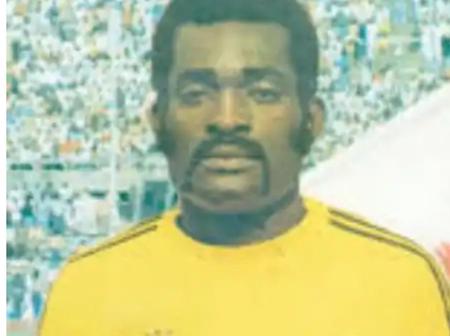 A goalkeeper with extraordinary abilities… capabale of catching and stopping even a fly… his acrobatic displays made the then President of Ghana, Kwame Nkuruma, to nickname him “the Flying Cat.”

It is said that nobody born of a man can score Rigogo… he only conceded 4 goals in his 42 appearances for the Nigeria national team.

Rigogo was one of the players that made the game of football so popular in Nigeria.

Fondly referred to as the prince of Monaco… Ikpeba lit up the whole of the French ligue1 with his mesmerizing skills and goal scoring abilities. He scored 84 goals in 102 appearances for AS Monaco.

Ikpeba won the CAF Africa footballer of the year award in 1997 and was a member of the Nigerian Dream team that won Gold medal at the Atlanta Olympics in 1996.

A great attacking phenomenon that was fond of scoring deciding goals for both the Nigeria national team and his club sides.

He scored 2 world cup goals in Nigeria’s inaugural appearance at US 94 world cup against Bulgaria and Italy.

In his short spell as a player, Amunike remain the most successful player at the national team level. He won both AFCON in 1994 and Olympic Gold Medal in 1996.

He player for the La-liga giant Barcelona in 1996, Sporting Gisbon 1994, Zamlex… He won CAF African footballer of the Year 1994.

Top and Surest Football Prediction Sites In the World 2022

NGSUP is a Digital tech company that amplifies the best innovations out of the internet through its Education, resources, signals, Investment advise, data, News, events and tech focused platforms. NGSUP Network Connects everyone and anything to a system of endless possibilities.

ImmiAccount Login – What is It and How to Sign Up

HOW TO MIGRATE TO AUSTRALIA IN 5 EASY STEPS WITHOUT STRESS